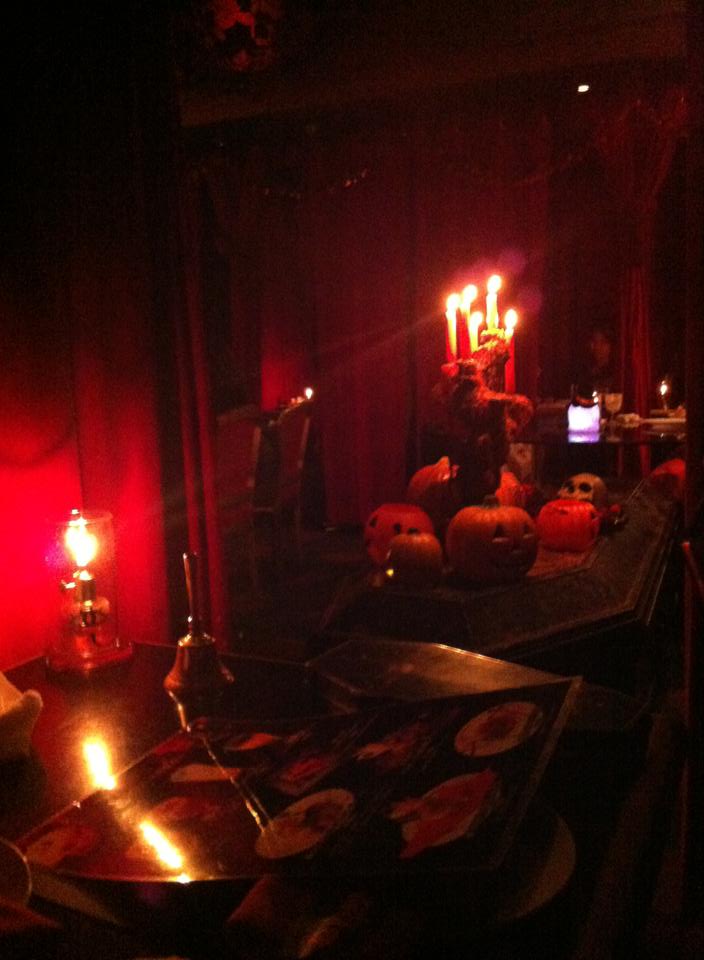 If you search for the weirdest, whackiest, craziest, strangest, scariest, spookiest or most unique restaurants in Japan, chances are you’ll come across plenty of references to the Vampire Cafe. Themed cafes, restaurants and bars are scattered all around Tokyo, with the Vampire Cafe located in the luxury shopping district of Ginza (銀座).

Having been underwhelmed by Christon Cafe the previous evening, I was hoping that the Vampire Cafe – also run by Diamond Dining – would live up to my rather high expectations. Happily, the Vampire Cafe did not disappoint. Both my partner and I really enjoyed it. We went right before Halloween, so they’d added some extra decorations that aren’t usually part of the theme.

Located on the 7th floor of a perfectly ordinary building, it’s immediately clear that a lot of effort has gone into decorating the restaurant. The colour scheme is, of course, blood red. The floor has the pattern of giant red blood cells. Deep red curtains hang from the ceiling, separating groups of diners by enclosing them in booths, menus are shaped like coffins, and each table has a bell on it to ring for service. There’s a coffin in the middle of the restaurant, candles, mirrors smeared with blood. Even the basins in the restrooms are stained with blood. It’s dimly lit and spooky, but it’s not scary. They’ve found just the right balance between dark and creepy, and a sense of fun. Pictured above is our waiter, Vampire Rose. If you ask, he’ll pose with you for a photo. He also attempted to sell my partner a copy of his CD. “Do you like Metal?” he asked, in a half Japanese, half Transylvanian-inspired accent. We didn’t buy the CD, but you can find him on Facebook and Twitter. When he’s not playing Dracula at the Vampire Cafe, he is fronting his own Metal band. Like Christon Cafe, the Vampire Cafe is not a cafe but a restaurant. It’s only open for dinner. After all, vampires only come out at night. And also like Christon Cafe, food photos are a little tricky as it’s so dark, but it helps to create a nice spooky, vampiric atmosphere. As such, please excuse the grainy photos. Once seated, a lamp on the table is lit, and staff bring hot towels – apparently even the undead follow the usual customs at a nice restaurant. In addition to the cost of the food and drinks, a small service charge is also applied to the bill. A small appetiser (pictured above) is given as part of this. This was salmon mousse on crackers. The Bloody Rose cocktail (pictured above) was my favourite. I’m pretty sure that I ended up having two of these, and I think my partner had one too. I’ve always been a sucker (excuse the vampire pun) for cocktails that have rosebuds in them. The entrees are good too. In fact, like Christon Cafe, I would say that the entrees are the best items on the food menu. This appetiser is called Cross Toast and consists of little pastry crosses with salmon mousse. Next up was fried camembert on crackers, arranged in the shape of a cross, of course. (Come to think of it, aren’t vampires repelled by crosses? Just some food for thought – if you’ll excuse yet another pun.) This was a winner for me, because a) fried camembert is always a winner in my books, b) the first place I ever ate fried camembert was at an Eastern European restaurant, so this seems fitting for a vampire themed restaurant. The food at the Vampire Cafe is predominantly European. The salmon avocado rice paper rolls were my favourite entree. Once again, they were arranged in the shape of a cross. I don’t seem to have a photo of my main course, but my partner had the devil cut chicken steak (with a stake sticking out of it), which he enjoyed. The dessert menu wasn’t as exciting as I had hoped when we visted. They must change the menu from time to time, as I’d seen pictures of better desserts than what we had. Pictured above is a simple parfait with what I think was meant to be a pastry hand sticking out of it. Parfaits are a big thing in Japan, and you can get some really good ones, but this one was nothing special. Ah. Another frozen crème brûlée. This must be a Diamond Dining specialty. I’ve said this before, and I’m going to say it again: I think ice-cream brûlée is basically a fancy way of saying, “We couldn’t be bothered making fresh brûlée, so we made a whole lot and froze it”. At the same time as keeping it frozen, they also managed to burn it (and I don’t mean it was caramelised – it was actually burnt). Freshly made crème brûlée, when done properly, is amazing. Simultaneously frozen and burnt brûlée which has not been freshly made is not. I had seen pictures of some kind of dessert presented in a chocolate coffin, and that’s what I wanted to order, but it wasn’t on the menu when we visited.

Note: Reservations at least a few days in advance are essential, and can only be made by phone. We had our hotel concierge make the phone call for us.

How to get to the Vampire Cafe:
If you’re catching the train to Ginza Station, take exit B5 (look for the Dior store – it’s just near it) and turn right.

Here are the directions, thanks to Google Maps:

Keep your eyes upward and you’ll see this sign on the building:

Enter the building and take the lift to the fifth floor.